since years my music library was continuously created with dbPoweramp. CDs were ripped with AccurateRIP and were stored as flac files and a lot of manual corrections were done. Every folder on lowest level represents an album and all titles, names and other texts are stored in correct localized manner. I thought that my library was nearly consistent.

Although I knew to never change a running system, I wanted more, detailed information and better consistent sorting the album artists and artists. All should be done automatically.

Now I played a while with SongKong and noticed that nothing is so easy like changing nothing!!
I changed different parameters, rename data files and folders or not, run with hot folder and manually, but always a lot of corrections of names, localizations, folder structure etc. were necessary.

So, summarizing what ist the best strategy and parameters for using SongKong efficiently on a “nearly” consistent music library and not to destroy parts of it?

Hi, in general I would say the Default profile should work very well but additionally you should enable All Existing Folders Represent a Single Album on the Match tab to ensure no badly tagged folders are confused as a folder of random songs.

I would generally not enable renaming files and folders if they are already well organized, safer to manually rename after tagging

Everyones situation is different so to help further I require some concrete examples of where you have needed to modify the changes made by SongKong.

Here is an example for one compilation with different presentations: 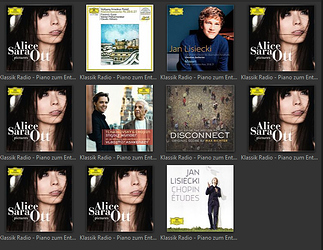 The correct cover for this compilation is: 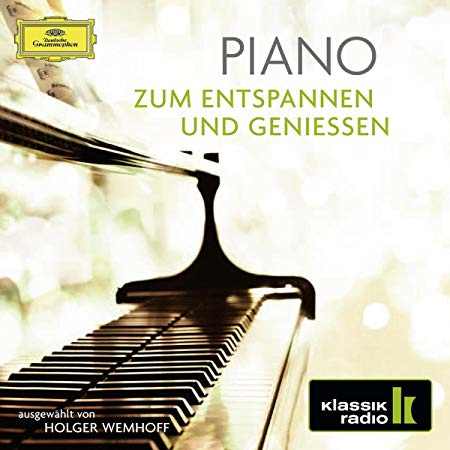 Hi, I think I know what has happened.

SongKong has the concept of Album matching and Song Only matching. It tries to match a grouping of song to one album, but if it cannot manage this it then allows song only matching. This means if it can identify a song but not an album that the whole group of songs can be matched to it will update song fields such as Artist but not fields specific to an Album fields such as Track No.

and this can be seen from screenshot. looking at the green tags 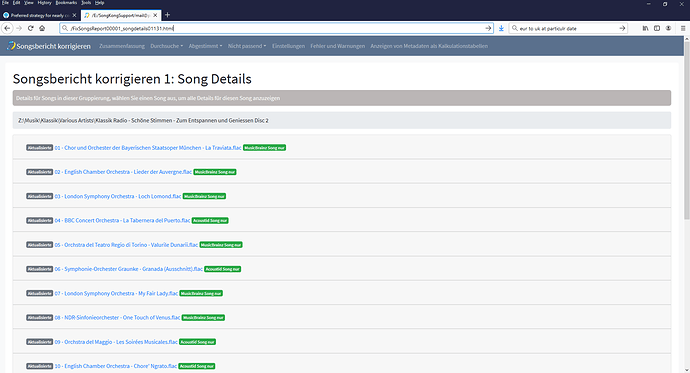 The logic here is if the album artist is blank it maybe worth us guessing it based on the track artist and I think this is what has broken JRiver. This goes against what we have said above we do not add album info but gets us closer to correct data, but maybe we can improve the logic here. Its not clear to me why some songs have added Album Artist and some have not even though found Artist and Album Artist was blank.

Can you go into Manual Edit and set Album Artist to Various Artists and see if that fixes it. It is worth noting because we only did Song Only matching we have not actually added/deleted or modified the artwork field for these songs, I think JRiver is just getting confused because Album Artist is missing or different for different tracks on the same album.

Ok, i changed Album-Artist (not Album Artist) to Various Artists and the cover art to the right one. Now, JRiver is not confused any more.

Besides I possibly found a bit of the “confusion”: The album consists of 2 CDs and were ripped into one folder, not with dbPoweramp but with iTunes, the Album Art fields were empty and the songs were not marked as parts of the compilation. (Sometimes iTunes had more IDTag information …)

Also SongKong does have some logic to try an identify if a set of songs is a Various Artist album, based on the number of different track artists. But because you had the track artist for all songs set to Klassik Radio it wasnt considered a compilation album. Whether album artist should be Various Artists or Klassik Radio is arguable but its not the track artist. Because you had as Track Artist but not as Album Artist that confused the SongKong logic, maybe I should do something about that.

Here’s what i mean: 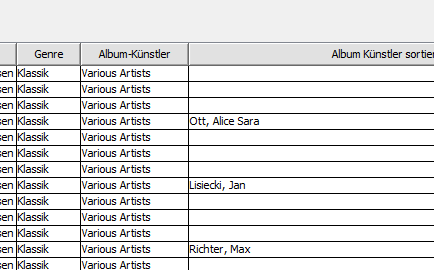 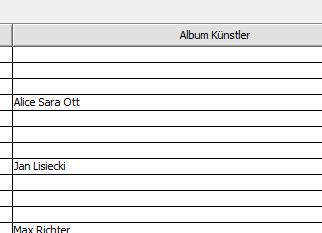 Hope you can tell me the difference …

Erm where are two screenshots from ?

From the manual editing page “Album”.

When you only have one artist there is no difference, but when credited to multiple artists there is a difference, album artist stores as one field with the joining words

and album artists store as separate/multiple fields for each artist

So it seems there is a mistake in German translation of album artists, but not quite clear what it should be. 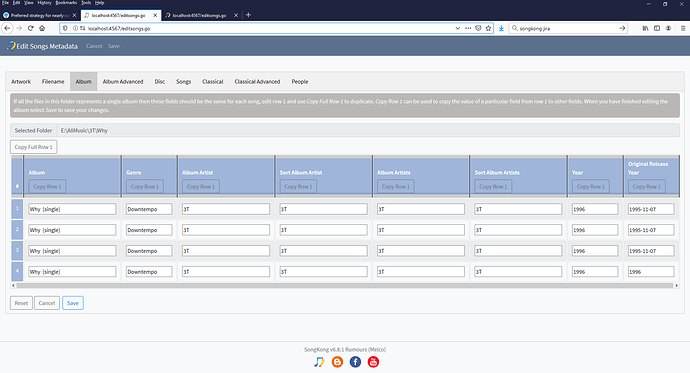 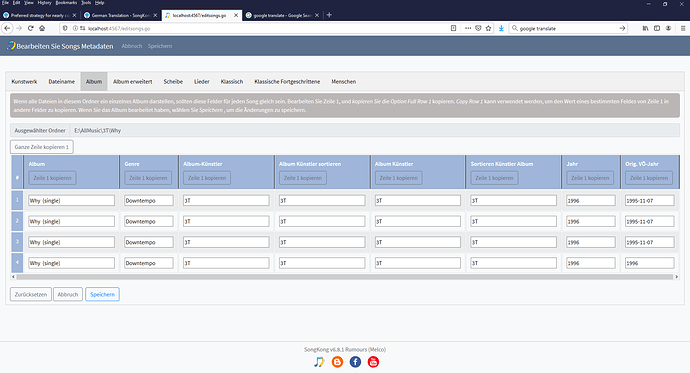 If you spot any more errors please inform me on German Translation topic and I will change for next release.

Ok, i found some mistakes in translations e.g. in explanations and bubble helps and will try to improve …

One simple issue is using Google Translate artist -> Künstler but so does artists, so Im unclear what the plural version would be ?

Artists means Künstler, too - it depends on the context

I thought, that Album Artist or Album-Artist means that there ist only one - like a band name or two or more artists named together for the album - and album artists means that there’re many artists credited for a production of an album. So, in my opinion mostly one artist or band name or “Various Artists” should be possible in the field Album Artist or Album-Artist.

Not quite, the Album Artist field stores as a single field, Album Artists stores each artist in its own field. When you have only one artist the value is the same in both fields but is still completed for both fields, when you have multiple artists then the two fields are different.

But how can I name to make clear it refers to plural ?

I have also added the full translation file as a spreadsheet to German Translation - which may be useful.

Hm, it’s tricky, because in German it depends on what someone says and means. If you would like to explain what you mean, a bubble help with Der Künstler for artist or Die Künstler for artists could help. The translation is always the same - Künstler.

But - for the one and only Album Artist i would use Album-Künstler, for Album Artists it’s ok to use Album Künstler.

Later on i will take a look on the spreadsheet.