New Old User to SongKong and Need Help with Saving!

I have about 60,000 plus song tracks lost in a accidental quick wipe of a hard drive that were mostly tagged in one way or another by using Jaikoz for a quick add of metadata to files and folder. After almost 24 hours of songkong it finished. I saved the report, but I don’t see where or how I can save the changes. I know I am probably doing something wrong, however. I just don’t know what it is. Preview has been unchecked. I am not sure where else to go to fix this. The folders I selected to save everything are empty as is the folder that was supposed to include the ones that didn’t match.

All of your help with this will be greatly appreciated.

Hi, unlike Jaikoz SongKong saves files as it goes along so they should already be saved. If you cannot see the files please run Create Support Files to send me your report and logs and I will take a look.

Thanks kind sir. I figured out what was happening a little after I posted this. It was something in the fix songs drop down that I didn’t do correctly. It finished completely a few hours ago. Due to what I accidentally did to my hard drive, I have a mountain of work to do to correct it. Songkong didn’t assemble everything into whole albums. If there are any there that are whole, there are only one or two. The original mistake was my fault, but next time, I am going to invest in a cloud for my sanity.

Hi there is an Undo Changes task that should be able to revert all changes made by SongKong. Also why not send support files and let me help you avoid making a bigger mess.

It’s less of a mess than it was. I ran it through Jaikoz to see if I could save some. Alas. Where are the support files that I can send you?

Just select the Create Support Files option under the Help menu on a desktop.

Did that shortly after you sent this message. Do I need to upload it here or does it automatically send? I can’t seem to find the files.

Hi, yes I have them

So I guess the mistake you refer to was setting Rename files based on metadata to Yes, for all files. However since the folder structure was already lost for the files anyway I dont see that was a bad idea.

And it seems 53,000 have been matched and look to be in good shape 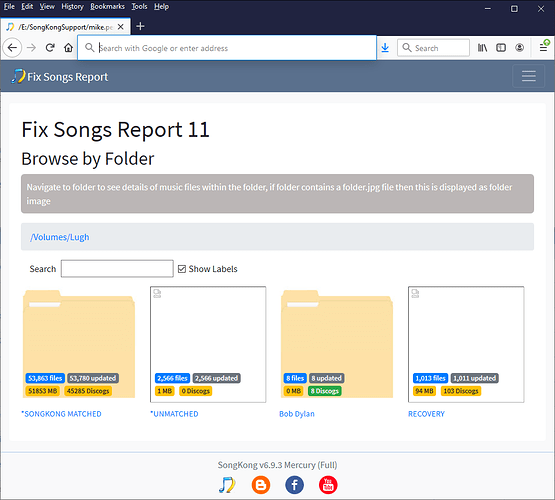 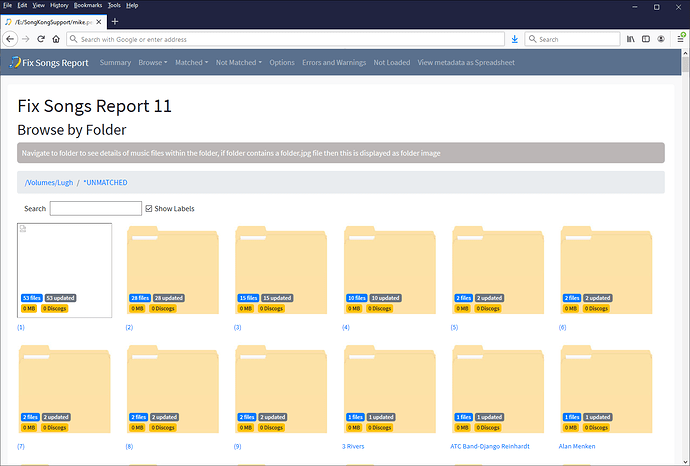 That was the second mistake. However, a majority of everything I looked at has missing files I don’t know that I have the patience to go through every album instead of just starting over from memory and now this list. Unfortunately some of these albums are things that friends recorded that can’t be recovered. It was a hard lesson, but a lesson nonetheless.

Okay I see what you mean about the missing files

e.g missing track 3 & 7, but I searched your spreadsheet and there are no stray Julianna Hatfield tracks so are you sure you originally had them all ? 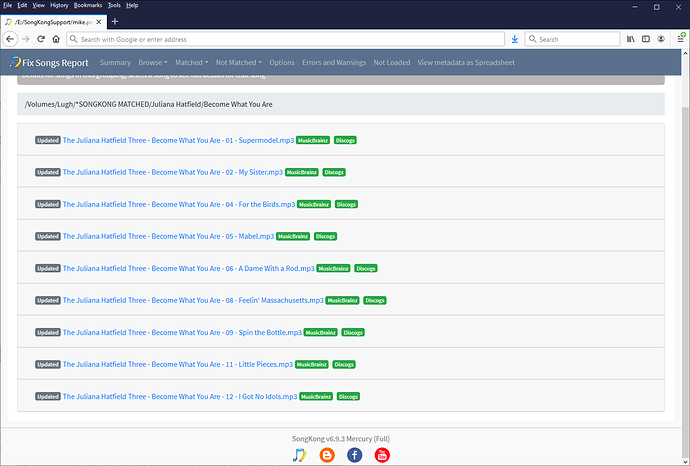 However, if I was you I would run again because now your folder structure is better SongKong will be able to bring some more tracks together.

Exactly how would you advise that I rerun it? Please be specific because I will be lost otherwise. There are still a lot of unidentified tracks and there are some Django albums that are whole misnamed that I have no idea where the hell they belong at this point. Some identified albums are even placed in the unknown folder as well. Everything is completely discombobulated, unfortunately and I have no idea how to get everything back together.

To your point, all albums were whole with all tracks, even the two or three Julianna Hatfield albums I had.

If it would make more sense to recover the audio from the wiped disk and start this process over from the beginning if it would yield more success, I am open to doing that. I just need to know the exact steps in the process, once I have the audio files again extracted and clean. NB, before I shoved everything through jaikoz and songkong, I could see the tags in a window browser. That’s what gave me the idea to push I through jaikoz first If there is a more efficient way to do this and yield close to the success you describe. I am open to it.

I just meant run Fix Songs task again, I think that will get you closer. But only you would know where the missing files are maybe they just got lost when the disk got wiped and are therefore no longer available.

If it would make more sense to recover the audio from the wiped disk and start this process over from the beginning if it would yield more success,

I don’t see how you would do that, if it is all messed up. And if my clean you mean without any metadata that doesnt help, just givers less information to help find a match.

What would be worth doing is loading the songs into Jaikoz and run the missings songs report, then you get a better idea of incomplete/complete albums.

I may have deleted a thing or two by accident. Everything was there before the wipe. Of that I am very certain. Doing a Fix Songs again after a convoluted jaikoz Metadata “fix” where whole albums were separated into a matched folder and a folder with a different name is totally unproductive. At the same time, some of those files are from my Internet radio shows. I’ve separated those from the last recover. Those will come up again. I don’t care about those at the moment. They’ll come up again but they will have already been saved. However, taking a SongKong to a fix Songs task to a fresh recover, may and probably should yield something better than what I have at the moment. If I have to recover again and throw in Jaikoz again to find anything that might be missing from the future second batch of Fix Songs, I’ll have to be OK with that. The second and latter seem less convoluted and more logical than what I saw from what I sent you. I will probably send you the results again once I have scanned the hard drive thoroughly again (deleted that file, foolishly and am in the middle of scanning/recovering again.).

Does all that make sense? Otherwise, I’ll just have to ask, is there a better way to actually do this? I’m going to check in one way or another once I get though this leg of the 48 hour tour with Gilligan.

I dont really understand what your possible starting point is. Are you saying yo can go back to a situation where songs are already organized one folder = one album or not ?

Almost EVERYTHING was tagged when it was recovered (due to a meticulously organized music folder and artists’ subfolders and individual song and track tags. Once recovered, that didn’t change except for some local unsigned music that I apparently had in the harddrive as well that I was saving for my radio shows. Placing everything in Jaikoz forced the names to be visible to my naked eye, including the many tracks that had corrupted subfolder album and artist names. I’m going to skip forcing Jaikoz next time until AFTER songkong if I do that at all. I don’t know that I can explain it in any more detail. If we were sitting at a table and computer face to face, I could explain this infinitely better.

So you did something in Jaikoz to mess it all up ?
Well yes in that case go back to the recovered version and just run SongKong against this.

Yes! You understand, completely. I’ll keep you posted. May take a few days to get it all done. Once I finish with Songkong ~2 days to start and maybe ~2 days to finish, I’ll send over the files and you can take a look and let me know next steps. I’d like to not lose most of these albums but I also don’t want to purchase a handful of CDs to extract all over again.

Before you run Fix Songs please run Status Report then you can see exactly what you have before you start making changes with SongKong.

Load the folder with the songs first? Then hit Run Status Report? It will load a status report without running? Is that so? I honestly didn’t expect that. I didn’t believe that was possible.