Hi Paul,
Thanks for the help with the licence upgrade and I’m writing as I also experience a freeze during Fix Songs process.
I’ve tried 5 times and have not got over half of the songs scanned before it freezes.
I have an N1Z/2EX with 6TB HDD; recently bought from a Melco dealer after being refurbished and upgraded to latest s/w by Melco. Running Status via SongLong shows the Melco has over 60,000 songs on it, but several copies of some albums which I’m trying to correct. (6 copies of Hotel California for example) Hence running Fix Songs.
Internet speed is 55MB download and 20MB upload which I think should be fast enough.
Have tried running the process on a MacBook Air and a PC; same issues on both.
Have even tried running via Safari, Google, FireFox and IE. Same issues arise.
The number of songs scanned varies between 11,000 and 28,000. After each freeze I do rescan the database.
Would appreciate any thoughts or comments please.
I also have a few additional questions.

When starting Fix Songs, does the process always start from the beginning of the library or from where the last Fix Songs process reached before freezing (and followed by rescanning the database)?

When running Fix Songs is it possible to also listen to music on the Melco? (I haven’t but am wondering if Melco can multi-task?)

I have backed up the Melco and at the end of the back-up process Melco showed 73,000 songs were backed-up. Why the difference between the back-up number and the Status number?

Any thoughts or comments would really be appreciated.

Then when you rerun SongKong with the defaults it will not try and rematch already matched songs from previous run but will still update them with latest information from MusicBrainz/Discogs based on the ids assigned, also it will try and rematch songs it had tried to match before but failed to match. But we can modify this so it concentrates on the songs not yet processed and this may avoid the crash.

On the Fix Songs Basic tab please do the following:

I guess you just mean you have run via the web-browser on pc/mac. So in these cases the processing is still actually running on Melco. If we cannot resolve the initial problem on the Melco then the alternative is to install SongKong locally on your PC/Mac (this is allowed with license) and then either use that to connect to the songs on the Melco, or better is to run on the backup locally and then restore the backup, see Initial Fix of Music Library

The limiting factor on Melco is not your internet speed but the fact that the Melco only has single cpu and slow harddrives. So although not quite as simple, running SongKong on the PC against the backup would be the quickest way to do initial fix of a large library.

Thankyou for the logs files, I can see it failed on memory usage, this should not occur, however the good news is I think if you follow my instructions about changing the options and retrying you should be able to complete within a couple of runs.

I can see by comparing this page from your first Status Report with your last Status Report that SongKong has already matched about half your songs. Because the number of songs matched to MusicBrainz has increased from 1,753 to 29,654 out of 58,333 songs (all those modifications are already saved). 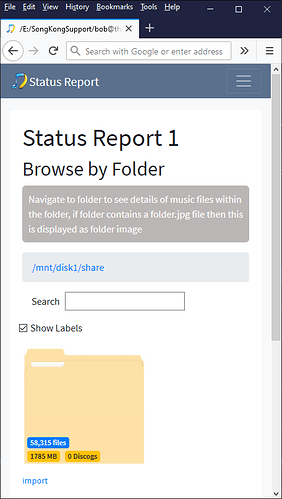 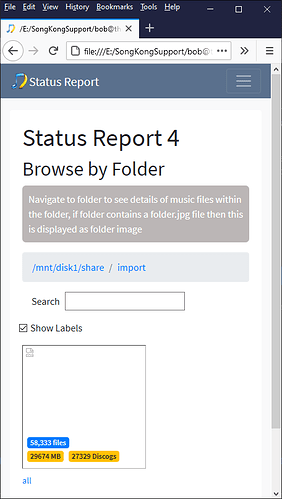 I have backed up the Melco and at the end of the back-up process Melco showed 73,000 songs were backed-up. Why the difference between the back-up number and the Status number?

From your status report I can see 61,555 loaded, and 305 could not be loaded because seemed to be corrupt giving a total of 61,860. I can only assume that you have additional songs in formats that SongKong cannot currently read so ignores, the most likely format being .ape (monkey audio) ?