Several songkong questions before I buy :)

So, I started playing with the lite (official unraid docker version) of SK.

It looks promising but I do have some questions regarding it (asked on the Roon community forums already, but I guess this is a better place to discuss this!)

1. After a test, SK was not able detect two version of the same album as a dupe

I ran the test on two folders, same album, same source, one being 320, vs one being FLAC.

Here, a screenshot of a ls -lah command on these two folders. You can see they are perfectly identical. Still SK did not detect the 320 version as the same album. What Am I missing ? 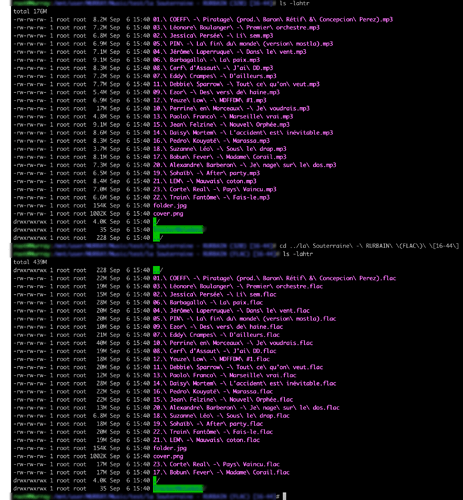 I did run a fix on a bigger folder for the sake of testing, and it did identify a lot of things (not everything though). Here is the result where dry-running that monthly folder :

I can tell you I have a lot of dupes in there, as I am snatching 16BIT and 24BIT versions of the same albums.

A lot of stuff is still not identified, I believe this is due to the fact a lot of my music comes from bandcamp, and beatports, which are not used as identifiers by SK (is this something we can hope to get soon???)

Problem is, I would like to end-up with identified and modified albums in a separate folder, and keep all the un-identified ones in their original folder. How an I achieve this ?

I firstly do store my music to a cloud based storage. And do use rclone in order to copy the music to my local storage.

In order to avoid re-downloading the same music all the time (as it was processed or moved, the sync would consider the files are not existing locally, and would be transferred again), is it possible to generate a list of processed folders ? So, in short, a list of each folder that had been successfully identified, renamed and/or removed by the duplicate finder tool ?

The current xlsx file do contain ALL the files. processed or not. Therefore it would be important for me to get a simple list of “processed” folders. Is this something I can configure in SK ?

4. I’d love to buy a license once the above will be fixed

As a Roon user, I remember there was a way to get a promo code. Last one I’ve foudn is not valid anymore, any chance I can get one here ?

OK so with the lite version due to the lack of modification of the files in phase 1 (fix), no way to identify duplicates (phase2). Clear.

Regarding the APIs, I’ve found this: https://community.metabrainz.org/t/bandcamp-as-source-of-acousticbrainz-data/546904/13

Do you think this could be somehow integrated to SK ? adding BC would really, really, add a lot of new identified releases, as a lot of artists are only putting their music on this platform

If in the meanwhile you already have one to share with me in PM, I’ll buy the license today.

That code is trying to do something a bit different, however yes it does give me confidence that I probably can get something working with Bandcamp and that is something I would like to do

5 posts were split to a new topic: Remove folders after deleting duplicates

4 posts were split to a new topic: Move processed songs