SongKong comes with a Roon, Fix Songs profile, you usually want to use this because it sets the options for the optimum compatibility with Roon. 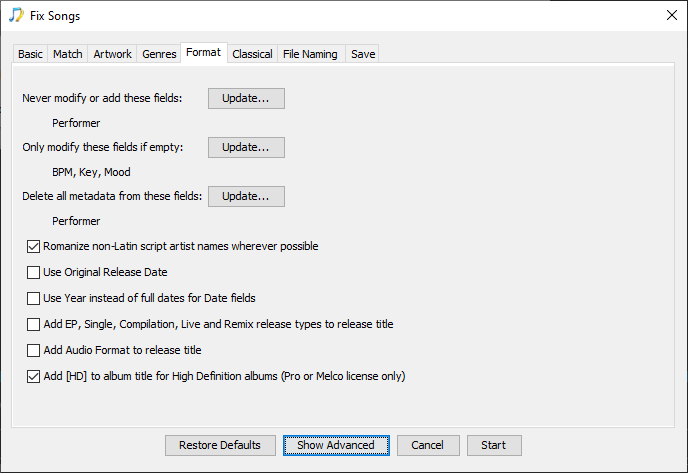 Don’t worry this performer data is also written to the InvolvedPeople field, and Roon understands this field and uses it to create the credits.

We do this by adding (Track) Artist to the Never Modify or add these fields option on the Classical tab, we also add the plural and sort variants. This prevents these fields being used when we match to a Classical album, non classical albums are unaffected. 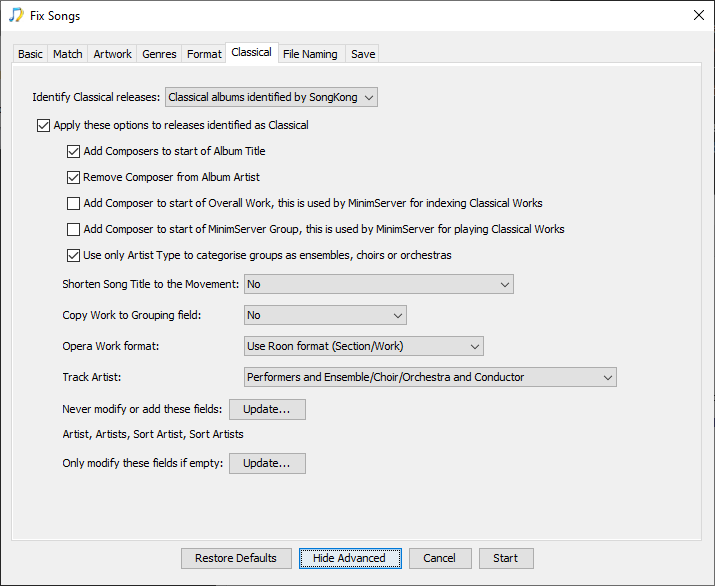 Classical albums create extra compilations for metadata tagging. Most usually classical albums consist
of a number of works, each containing a number of movements. Sometimes a work contains another
work, most notably Opera usually consists of Works, Acts and Scenes. SongKong works well with both
Roon and MinimServer but these two applications have different incompatible ways of dealing with
multi-level works such as Opera. Roon uses Movement, Section and Work but MinimServer uses
Movement, Work, Overall Work, the Opera Work Format option lets SongKong switch between the two alternatives.

For Artist save Multiple Values as separate fields

This has a number of advantages, however Roon only understand multiple artists in the Album Artist field not the Album Artists field. So when an album is imported into Roon this can lead to albums with multiple album artists creating a single link for the combined artist rather than for each individual artist. So to avoid this we can add the fields to the Save multiple values as separate fields option

Add technical roles with own field to InvolvedPeople field

Roon seems to be able to read from both fields,and will remove any duplicates. Adding to both fields maximizes the chance of Roon importing the data for all audio formats.

To be sure to be sure as they say, once I select the roon profile all the key settings further down this post are automatically set?

That is correct yes.