SongKong has relabeled quite a few of my songs as garbage. For example:
22 - Frogger.mp3

was renamed into this:
BZH6XA~6.MP3

There’s almost 500 (out of over 3k that were tested against) songs like this with over 160 that songkong didn’t even bother to return what extension the file was using prior.

This occurs if the files are on the network, and the new filename causes a conflcit between the networked computer and the local computer. If you go to the computer where the files are aactually stored you should see they names are fine, the problem is that there are characters that cannot be rendered correctly on Windows so it makes up a name.

Here is the screenshot of the folder songkong manipulated which I had not deleted yet. As you can see there is human readable files along with garbage labeled files 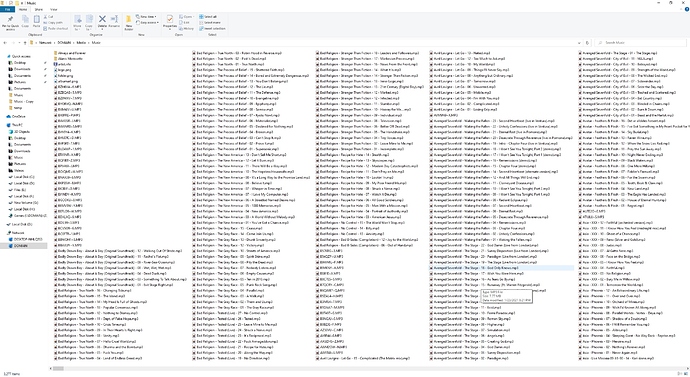 I believe I have identified why the kong is doing this. I will send example files soon(ish)

Ok; I have 3 issue’s with SongKongs naming files that is caused by 2 issue’s that I have been able to identify so far and I believe these issue’s is also what is causing SongKong to crash ALOT.

As I mentioned in the long winded thread I used a program called beets to attempt to setup my music folder with mixed results.

A) One of the folders it created was for songs it could not identify who the artist was labeled [unknown]. I can only assume SongKong does not like the use of the “[ ]” for the folder label

Every single song that was in folders with either of those requirements ended up messed up.

I can provide example for the first 2 if you like.

I don’t think it is SongKong that does not like these characters, the problem is but that they are okay on the Nas but not valid for Windows so when you look at the files via Windows you get these problems.

You are running SongKong on a Nas and the filesare on a Nas, so if you look at the filenames on the Nas itself (i.e by connecting from PC to nas login via webbrowser) do the filenames display okay?

Have you managed to check my suspicion that the files are actually named correctly on the nas yet ?

Yes; the files are named correctly on the nas

Great, so is that problem now resolved or not, if I do resolve problems it is helpful if you can reply and confirm the problem is resolved.