It seems like the ID3v2.3 Language/TLAN field (at least) is somehow not properly (or to defacto standards) being written-to or read-in by Jaikoz. Details below.

I started with a “clean” Mp3 file (having no tags whatsoever). I had deleted any existing tags and checked they were “really gone” by using a hex editor. Then, using another app (not Jaikoz), I added an ID3v2.3 tag with a Language field (ID3v2.3::TLAN == Jaikoz-ID3v2.3::Language), populated with an appropriate three-letter code (“fra”, meaning Francais/Français i.e. French-language). Actually I tried this same routine - producing same result as below - from three different apps.

When I then opened this file in various apps (tag editors, players, mediainfo, a hex editor), the expected TLAN/Language value was shown (either as “fra” or “French”, depending on the app).

However when I loaded the same file into Jaikoz (11.6.1 Doves, for macOS), the TLAN/Language field was displayed on-screen as blank. Despite the tag’s other fields being shown (the main ones at least, I haven’t checked every one in detail).

On the other hand when I entered (overwrote it with) “fra” in Jaikoz, then save/close and re-open that file in Jaikoz, the language was displayed (as “French”).

I next looked at this (Jaikoz-saved) file in a hex editor, to see whether Jaikoz saves TLAN data-field in a different format. I noticed that, in the hex, the preceding data-field (TPE2/AlbumArtist) had a string value that was not terminated with a Nul (Hex 00) character, instead the first hex value after the final letter of the TPE2 data-field was for the first letter (“T”) of the next data-field (“TLAN”). It looked as if, in the hex view of the data, the first of these fields had run up against the start of the other field.

Whatever, I get the impression Jaikoz is doing/expecting something (at the binary/hex level?) non standard (de facto at least) with this field.

Is there a bug here, affecting TLAN or possibly something more generic?

Hi for ID3 most fields do not end with a null character, and this is not a defacto standard either. So it sounds like to me like there is a problem with your initial app rather Jaikoz, what app are you using ? You say you repeated with two other apps but I wonder if the field was already entered by first app, the other apps didn’t have any effect.

You say Jaikoz didnt load the language you had entered from another app, but you dont say after editing with Jaikoz is the Jaikoz modified file read correctly by other apps ?

Thank you Paul. Yes I see now (having done some more hex analysis) as you say: most fields do not end with a null character.

I did some more tests, to confirm answers to some of your questions. I found that:

At the same time, in the hex editor I noticed that the value-strings (e.g. “fra” for language) from Mp3Tag (at least, as I have configured it) differ (from those of Jaikoz) in the following respects, which may offer a clue(?):

Does this imply Jaikoz writes and expects UTF-8 whereas Mp3Tag writes UTF-16 ? In any case, it seems the other apps can read both UFF-8 and UTF-16. I am in uncertain territory here, just making my best attempt to understand the coding.

I wonder if it could be the leading [FE FF] and/or the use of UTF-16 in ID3v2.3 is unacceptable to Jaikoz. I see from the StackOverflow thread that “UTF-8 is an ID3v2.4 feature not present in 2.3”.

But I am no expert in this.

Now it would be worth checking the value of the Version field when you load into Jaikoz. By enabling the View/Show View Pane you can see what version it has loaded as in top panel, then you can check it is going to save as in bottom panel because depending on Save:Write Tag Version option it may be automatically converting to ID3v24

Now why is it not reading file from Mp3Tag correctly ?

The best thing to do would be email support@jthink.net such a file before modified by Jaikoz so I can see the behaviour for myself, then i can investigate further. 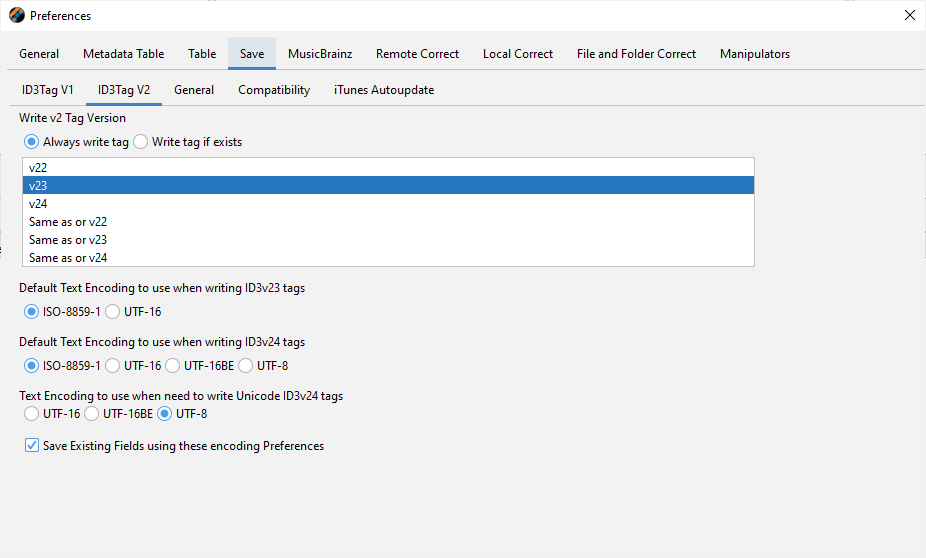 The View > Show View pane, with that file loaded, shows the Version as ID3v23
(as does the main central pane)

I examined the Mp3/ID3 in the smart hex editor SynalyzeIt, with its automatically detected grammar-template for (parsing) Mp3, which here also includes ID3 (template).

In fact I gave it four variants: one written from Mp3Tag, one from Jaikoz, one from MusicBrainz Picard, one from Foobar2000, one from Kid3 (macOS version)

SynalyzeIt’s MP3/ID3 grammar-template (whether or not it is perfectly defined!) “preferred” the Jaikoz variant. But how could it be that three apps could be “wrong” in the same way? Or is the grammar-template based on some assumption also made by Jaikoz?

For Jaikoz (mac) and Kid3 (latter with its default text encoding) it reported:

For Mp3Tag and Picard and Foobar2000 and for Kid3 (latter with text encoding set to UTF-16), it reported:

Hi, okay so the ID3c23 spec is as follows, each field is called a frame, and each frame has a 10 byte frame header consisting of:

So in your example you have:

So the problem is the frame says its contents are 11 bytes long, but its frame body actually only seems to be 9 bytes. Now I’m not clear because this is the only frame is this one if the frame body is only 9 bytes and the frame header is wrong, or if the frame body is actually 11 bytes and contains two unneccessary null bytes at the end. But either way is wrong because those two addtional bytes (one char once converted to char from bytes) mean that we don’t get match to a language because we are looking for fra\0 rather than fra

If I modify my Jaikoz code to search for ‘\0’ chars and remove and then lookup language it also works, but I shouldnt have to do this, this is a bug in Mp3tag

The specification has always been at https://id3.org/ but unfortunately this does not appear to be working at the moment.

It would not be such a problem for general text fields because not matching value to a list and therefore because null chars not visible you would not see problem, so more problematic for Language field.

I found this https://community.mp3tag.de/t/x-trailing-nulls-in-id3v2-comments/19227 it seems his misread the spec, then realized he had misread it but decided to leave it in anyway !

Done a workaround to strip trailing nulls for TLAN framer when encountered so can map to language okay
https://jthink.atlassian.net/browse/JAIKOZ-1439 will be in next release later today.

I will take time to absorb what you have explained and ! will delve further into examples written-out by the various ID3 tag-editing apps I mentioned previously.

And of course I look forward to checking out your new data-error-tolerant version!

Yes, Pulp’s a beaut! Now I can carry on tagging those french songs with no worries.

Maybe not over yet? I may have identified a knock-on problem, as below.

One concern just occurred to me: In Jaikoz, multi-value fields use null as a delimiter. So stopping reading on a null would return only the first value. I guess the way to fix this would be to terminate string-reading only on (at least) two nulls in succession (not merely on “null encountered before end of string according to length-value”). Or - more robustly (?) - maybe the “continue reading” rule should be “null followed by printable character” ?

This potential problem occurred to me just now, after doing an experiment to add two artist names in the Artist field (for a single file/song/track) then check what that had done, as follows:

The best solution is simply to use ID3v24 instead of ID3v23.