If I first scan with Picard software then Songkong find the correct remastered version but it is double step and I paid this software in order not to do two step correction. It is sad to have remastered album issue

Normally with Acoustids not possible to identify differrecences between the remastered and original version, so then if there are a number of potential matches SongKong uses your preferecnes to decide the best fit. 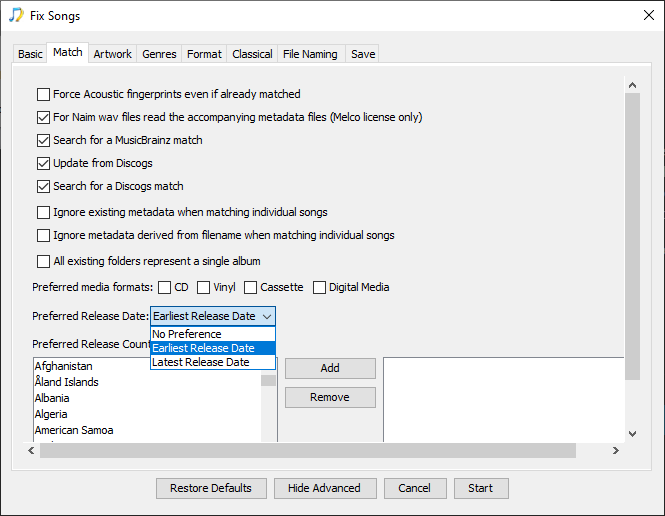 Okay I diodnt know that, if it is two discs there may be something about folder structure that prevented it realizing it was one album, best if you run Create Support Files so I can see in more detail. Also if have already matched album SongKong wont even try to rematch unless Basic:For Songs Already Matched is set to Rematch

Thank you Paul for fast response. In this particular album I solved the problem. After you said folder structure I reorganize the folder names than it matched with correct version. In the first failed case folder names was
2001 - Biosphere - Substrata2 - 2CD [Touch TO;50]_(D1_2)T
2001 - Biosphere - Substrata2 - 2CD [Touch TO;50](D2_2)_T

Then I put these folders under Biosphere-subtrata2 folder as CD1 and CD2 seperate folders. then adjusted " Basic:For Songs Already Matched is set to Rematch finally software find the correct match. With the previous folder name structure it is not able to find the correct match even if they are placed under Biosphere-subtrata2 folder (Also tried in both options of all existing folders represents a single album checked or not. If you still need support files I can create them if you could describe how to create them.

Then a question rises, is there any suggested folder naming structure for the best results?

That is basically the right approach, support files would be useful. If using desktop version it is under the Help menu, if using web interface it is just at the top. You just select Create Support Files and it automatically uploads your SongKong log files and last few reports to my server.

I have sent the reports, I hope they include useful hints to solve that issue

Thanks for the reports, but as I said it only includes the last few reports, in this case reports46 - 50. But report 46 was the correct match so I cant see the problem in easrlier reports. However I think I have explained the issue, if you have multi disc albums but don’t have all files of the album either directly in one folder or in Disc X subfolders under an album folder then it is difficult for SongKong to realize this are one album rather than two albums to match.

I did notice you were setting Multi Disc Releases to Add Disc No to the release title if disc has title, I would recommend setting it back to Never add Disc No to Release Title because otherwise the Album field is not consistent for all tracks on the album. The option was originally added to resolve an issue with MinimServer, that problem has been resolved and I am thinking about actually removing this option in the future.

Dear Paul thank you for your suggestion. For the case reports I can re do the failed fix case for you, if you still want to analyze. But this week I am out of home so I can generate repots next week.

I think it okay, as the issue is really how you are using if now understand should be no problem.