"Manual Correct Metadata from MusicBrainz" seems to be broken

In the first song (Haircut One Hundred), the Title is not correct. I select the sequence number of this song and start “Manual Correct Metadata from MusicBrainz”. Then a dialog box appears. In this dialog box, I select the second row with contains the correct Title. See the image below.

I will send a support file that I created just after doing the above.

Hi, i looked at your logs files and there were no errors, I tested it myself and it worked okay so I don’t know what is going on here.

Could you retry test please.

I did the same test again, with the same results.

Hi, I tried with your files and it works fine for me so I don’t really know why you are having an issue.

Is it only the Title field that doesn’t get updated or all modified fields ?

If only Title do you perhaps have it included in Preferences:Format:Never modify these fields? 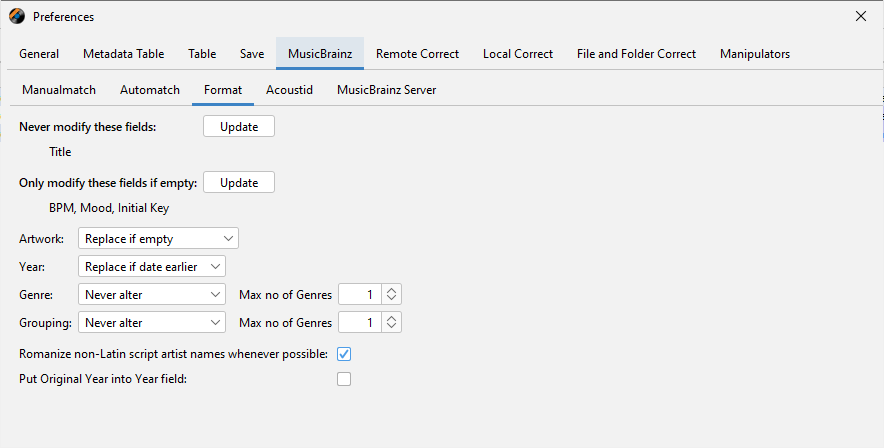 Thanks for looking into this again. Your suggestion to look in “Preferences/MusicBrainz/Format” was completely on the mark. The “Title” field was in “Only modify these fields if empty”. This blocks, of course, any update or manual correction from MusicBrainz for fields that are not empty. I am sorry for my lack of careful thinking about the effect of this preference.

After removing “Title” from “Only modify these fields if empty”, “Manual Correct Metadata from MusicBrainz” works as expected for “Title”.