I am running Songkong on my M1 iMac (Big Sur 11.5.1) to scan songs on my Roon music. Roon runs on a dedicated i5 machine (small green computer, similar to ROCK?) with the SSD being internal.
I have turned off Roon as instructed on the Roon page and set Songkong to work. Twice now it has run for 3 or 4 hours and then the mac has crashed. I have seen the info page showing how many songs are scanned and what services are being used, last night it was up to about 5000 but this morning it had crashed again.
Can anyone help?

Hi, please start SongKong then use the Create Support Files option to send me your log files

Hi, okay unfortunately nothing in the logs but then if it is totally crashing out of the blue then there would not be, Java applications should not crash dump in this way, indicates some kind of error in the JVM and Apple M1. Actually because you have the M1 chip Apple will just be Rosetta emulation, I need to build a native M1 build of SongKong instead of just the Intel build, but there still doesnt seem to be an M1 build of openJdk available https://adoptopenjdk.net/releases.html?variant=openjdk11&jvmVariant=hotspot

Could you check the MacOS Console log and send to me to see if that registers the crash.

The good news is that SongKong works on multiple folders in parallel and when the songs in a folder are identified the changes are saved so actually everytime you run SongKong it will be matching more songs not just trying to rerun the same songs.

By default if you rerun Fix Songs against folders that have already been partially matched it will not rematch the matched songs but will try and match songs it couldn’t match first time round, but
if you modify Ignore songs previously checked that could not be matched (Advanced option) so it is checked then these will be skipped and this should help SongKong to proceed further beforefore crashing. 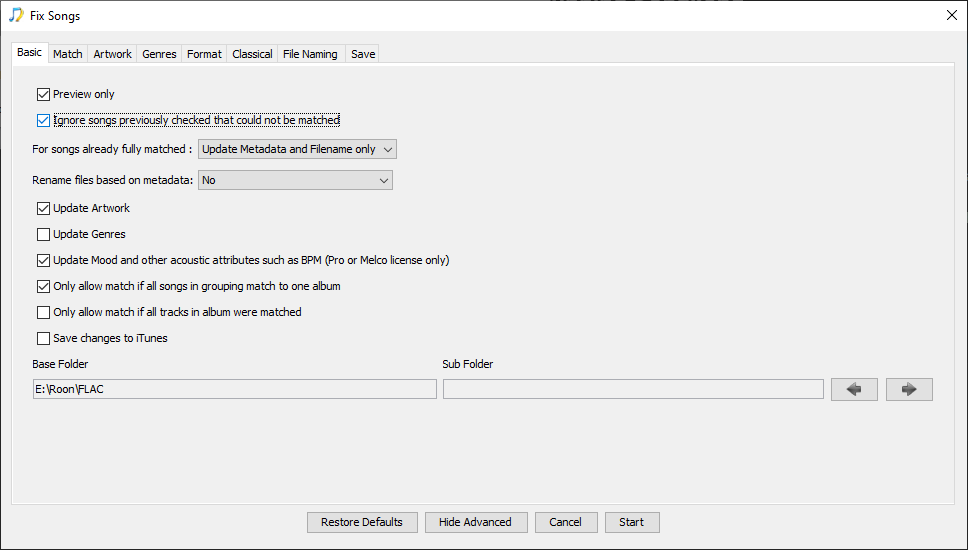 Hi paul,
Thanks for the response. I recalled i ahve an old Macbook Pro with an intel chip (2012) which i recently gave a bit more ram and an SSD and i tried that yesterday instead of the M1 iMac. LAst night it did almost half the library and i have paused it (we tned to listen during the day) and will start it up again toninght.
If i set up a ‘watch’ on the Macbook for songkong will this remain running when the mac is asleep?
Hopefully the M1 will be supported in the longer term and then i will use that instead.

okay, glad you have a workaround.

Watch Folder only processed new songs being added to folder, I think you just need to unpause Fix Songs and it should just continue running on the macbook unattended until completed.

We will add direct support for Mac M1 when an AdoptJdk Java build is avaialble, although setting up new builds for Macs is always a bit of a nightmare since the instructions are always geared towards a Mac only build with Xcode, something that we don’t use because not applicable for Java based application.