I’m currently using Jaikoz on Mac OS Big Sur. Jaikoz has been working great for correcting the general information for my music library, but I’ve been having a strange issue with album artwork specifically. In brief, when I use “correct local artwork” on Jaikoz the album artwork is added to the file directly and appears when I examine the file in Finder. See below: 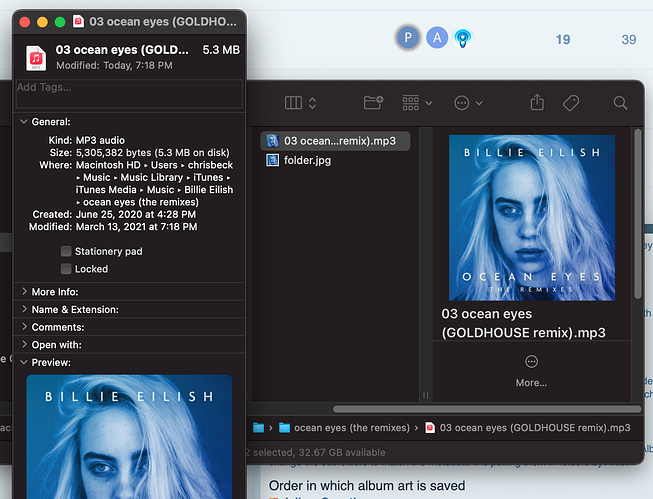 However, the issue comes up with the course in “Music,” the new replacement for iTunes. While everything else changes (e.g. artist, album, etc) correctly when the song is corrected in Jaikoz, the album art doesn’t change. When I play the song the album art appears in the miniplayer as normal, but the artwork doesn’t show up when viewing albums or when I “get info” on the song. See below again:

I’ve tried deleting and re-adding the song and it won’t work. I’ve also tried saving the artwork as a separate file as well. I’ve also turned off all of the Apple Music syncing since it was screwing other things up. One thing that’s a bit strange from my library is it was originally created in iTunes, so all the songs for the Music library are separated in the old “iTunes Media” folder. I don’t know if that’s the issue, but if anyone has had a similar issue or knows what might be the case (or how to create a new, consolidated Music library without losing my files. Thanks!

Hi, do you have Preferences:Save:Compatiblity:Do not unsychronize ID3 tags enabled

If not that maybe the problem, the option should be checked.

Unfortunately it is checked. Jaikoz is correctly embedding the album artwork into the Mp3 file but the new music app isn’t reading it correctly. So it seems to be an issue with the new Apple Music program. I was able to delete a song and then re-add it and it showed up correctly, but I’d like to avoid needing to re-add every song.

What about if you just select all songs, and right click and select Get Info