I see an inconsistency on updating some fields.

When i ripped this album

I had updated the metadata via jaikoz and, in musicbrainz, the credits were at the release level and not at the recording level. Furthermore, some data was not correct (for example the “bass” instrument and not the “bass guitar”).

Later I had changed the album in musicbrainz by moving the relationships at the recording level and changing the inconsistencies (“bass guitar” and not the generic “bass”).

After the last albunack update, I used Songkong to update the metadata but it did not delete the previous incorrect ones (and no longer present in Musicbrainz) but it seems to have added them to those already present previously

Hi, we dont delete existing credits on the basis they may have been added from a 3rd party source or added manually, and the Musicbrainz and Discogs sources are often incomplete so we dont want to lose these edits. The situation where the MusicBrainz credits are actually wrong is relatively rare, the workaround for you would be to empty the field first, or manually remove the ones you changed when you modified MusicBrainz

I don’t think there is anything for me to fix here, unlike something like Picard Jaikoz is not so tightly coupled to MusicBrainz, it is just its primary source.

Ok. But I guess this only happens on specific fields (all those that can contain multiple values? Or just a part of them?). Or even in fields that only accept single values?

I think its only applies to Performer Name, Perfomer, Instrument & Involved People

Other fields typically only have at most a couple of values and if MusicBrainz has a value its complete. So by default we do completely overwrite these fields, but you can also configure any field to Never modify or add these fields or Only modify these fields if empty 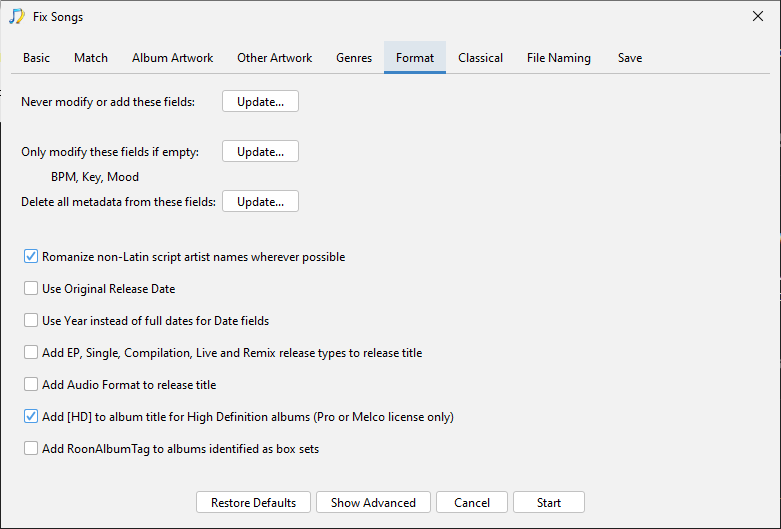