Firstly, absolutely love using Jaikoz, this has managed to cut down so much time and effort for tagging music (especially for more underground or unknown releases)

A quick query though, as I pull most of my data from discogs, is there a way to pull down the release date from the “master” record of that album rather than the direct release? Oft times I find that it will pull down the date for certain territory release (IE: the album’s initial release was 1988, but would come out in another country in 1989, or re-released in 2000, and discogs sometimes chooses 1989 or 2000 release)

I’ve looked in the options but can’t find what I’m particularly looking for, but might be a bit blind!

Hi, Jaikoz provides YEAR field that should match to the specific release it has been matched to, and ORIGINAL_YEAR which is the earliest release release a track was found on. However we currently only support ORIGINAL_YEAR for matches to MusicBrainz, our primary database. 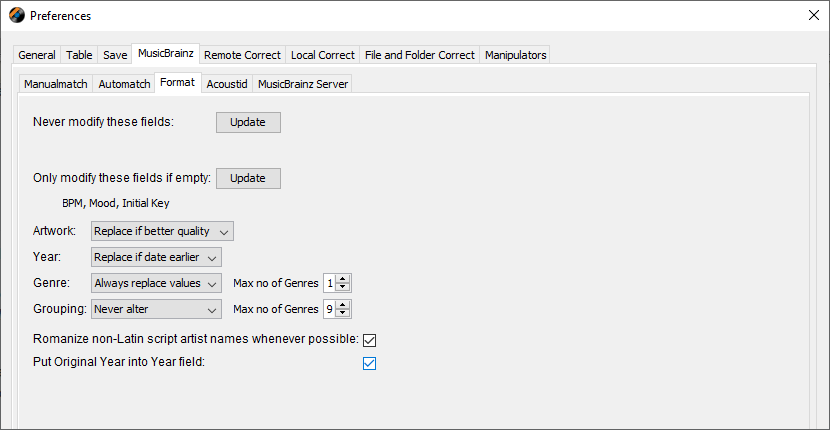 Hey Paul! Thanks for the reply, that makes total sense

I usually use the AutoCorrector and review the results. I have set MusicBrainz to put original date in year field and this works for the most part, but I do have these randoms turn up, below example:

Each track has the same MusicBrainz release group ID, and the earliest release date is indeed 1990-08-28, but not sure how those 2 tracks are returning a different date? Ideally i’d want this to be uniform. I’ve set discogs to never replace the date and musicbrainz to always replace

Hi, it is because the Original Release Year and those two tracks are also on the We Die Young EP which was released that slightly earlier release date.

Should we just have the earliest date that all songs for that release, so it is consistent ?

You could argue that, I am not sure what is the best approach. Where it currently gets very different is with Various Artist compilations where by the ORIGINAL YEAR is different for all songs, whereas the YEAR field would be the same for all songs (as long as not using Put Original Year into Year field option), but most would say the earliest release date of the song is more interesting than the earliest release date of the compilation album.

Timely as this dovetails with my earlier post as well. I’m also looking for a way to fetch the original release year but have it uniform and NOT based on individual tracks’ original release year, which often vary. I was trying to fashion a mask that only fetches and displays one value for all tracks with my post a couple days ago, but I don’t know how that could be done from a consistency standpoint.

@wilcoson Right, okay yes I see that, there isnt a way for you to refer to other tracks so it is not possible.
I need to add either new fields or options, and the workaround would for now be to manually correct the ones that are different.

Thanks Paul. At the moment I’m just manually correcting anything that has an inconsistent date by setting it to the release group earliest year