Can I delete artwork from otherwise empty folders?

I’ve used many other tagging/organizing apps in the last 20+ years, including iTunes, Music for Mac (app), Jaikoz, MusicBrainz (Picard was my first version), TuneUp (I started on Windows and moved to Mac in 2003), etc. SongKong is the most thorough and flexible of them all.

Now I’m trying to use SongKong to whip my whole library into shape (actually, I have three libraries – pop-rock, jazz-blues-world, classical, and a smaller xmas music database – and use Roon to play them). I made the mistake of asking SongKong to save artwork to album folders as well as within the files themselves. That has resulted in many folders that have no music (.mp4 ALAC) files, only .jpgs or .pngs, some of them nested in album folders within artist folders. Lots of clutter and stray tracks showing up in the file system and Roon. It’s too late to undo that now, but is there a way to delete image files only from all remaining folders? Couldn’t find anything in the user guide. Thanks.

I’m not really clear why enabling this option would cause SongKong to save artwork in a folder that had no music because it is saved in the same location as the music.

Is what happened that you did and then moved the music but it left the artwork behind ?
It should not do this as long as If song moved to another folder move is set to Everything 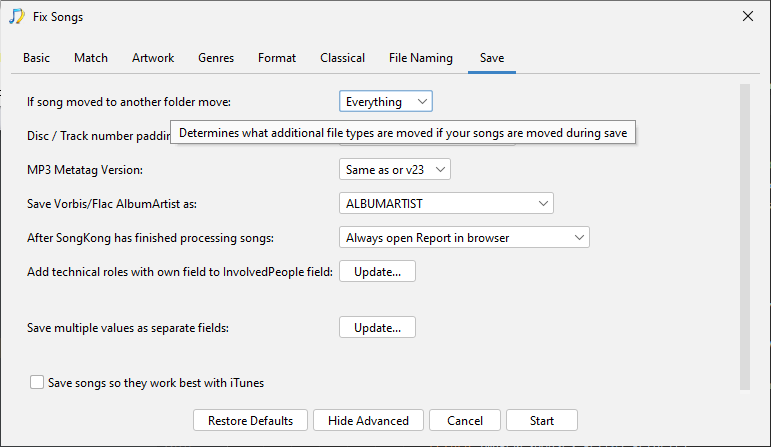 But maybe does in some circumstance, would be useful if you could run Create Support Files and show me a few examples to see if anything need fiixing here.

As to removing these image files now, the solution would be simply to use Windows Explorer (Windows) or Finder (MacOS) or find (Linux) to find and delete the image files.

I’m not sure what I did, either. I think I was fooling around with options and then forgot what I’d selected. It appears that in most cases the artwork-only folders were ones that had been renamed by SongKong with a (1) or (2) appended to the folder name. I recently emptied my database for jazz-blues so I could start on the pop-rock library. I’ll run Create Support Files anyway and see if it provides anything you might find useful.

That sounds like a possible bug, maybe the copy other files routine not being called in this case, I will take a deeper look next week.