New user here … when I select a single file and then AutoCorrect, the system does exactly what I want it to - couldn’t be happier.

However, if I take 150 songs (for example) and “select all” and then “Autocorrect” I get different results …things like album art never get updated nor does the Genre get set correctly. There’s probably some other things too … is this a setting somewhere?

I’m on Pro version if that matters … thank you in advance.

Are all the songs in a single folder ?

Okay, so by default Jaikoz tries to match group of songs to album , if it cannot do that it deosnt match to album, it matches song only. The starting point for a group is the folder because usually customers store songs, one folder = one album. If you have very many songs then it realizes it is a random folder of songs and doesn’'t enforce this restriction, but even then it may try to group by metadata which may prevent some album grouping.

When you only try to match one song yo are only trying to match a group of one, so ti can always match to album if the song can be found in database.

If you want to temporarily disable this restriction just uncheck **Only allow **
match if all songs i grouping match to one album in Preferences:Remote Correct:Match 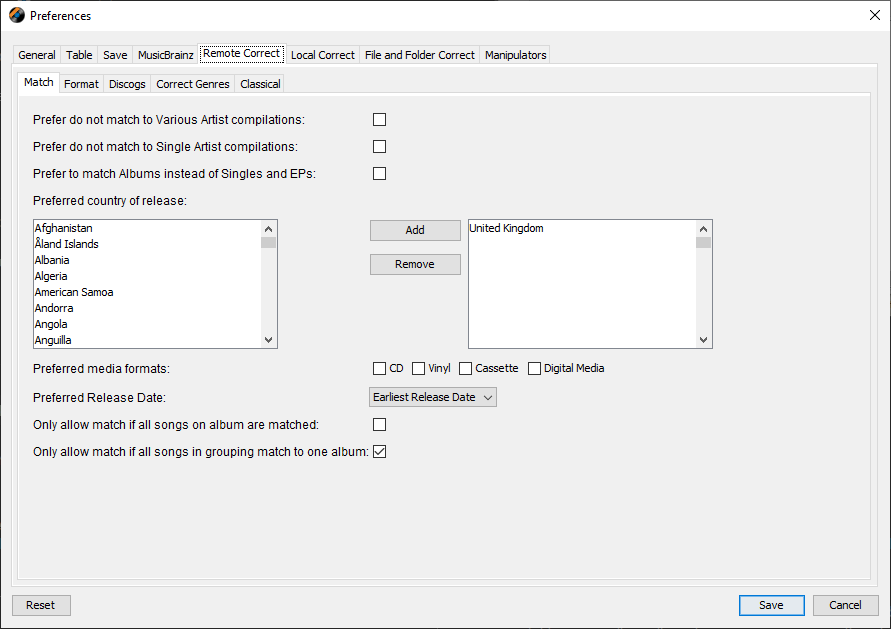 But if you care about albums once you have songs sorted you should use sub folder renamer to organize into album folders, most applications work better with albums organized into folders, and then renable this option

Thank you - this helped somewhat but there’s still quite a difference. Albums that the songs were from and the genre still doesn’t match (when done in bulk vs individual).

The reason I have these all in one folder is this is for DJ use where I don’t care about the album matching and am more interested in genre, year released etc.

Yes, but Jaikoz cannot add the album art if it doesnt know the album.

Albums that the songs were from and the genre still doesn’t match (when done in bulk vs individual).

Its because when matching a group of songs it may group them differently to if just matching one song at a time, for example you may have two songs that are on the same compilation album so Jaikoz is going to prefer to match to this as it reduces the total number of albums your songs are spread over.

It may make sense to have Jaikoz have a go , then run rename subfolder so in seperate artists and albums, ,move a few files around manually if you don’t like how they have been categorised, then rerun. Then once you are happy flatten the folder structure again if you really want in one folder. Or alternatively could you keep the artist/album structure and the just create a playlist containing all the songs, so you have easy access to any song as a list whilst maintaining the more logical artist/album structure.

Ok thanks … I guess what I’m looking for I misunderstood. I am looking for a “batch” operation vs a “group” operation I suppose … I never really considered the difference until now. Is there anyway for the software to batch process and not treat the music as a grouped entity? That option of turning off the group match that was suggested previously … that’s kind of what I thought it would do quite honestly.

Disabling that checkbox means that if it cannot match all the songs in the grouping it will add the album metadata for each song regardless. There shouldn’t be much difference between matching the songs in one go or one by one, but there will be some difference. There isn’t an automated option to do exactly what you want but you could make adjustments using Action:Remote Correct:Manual Correct from MusicBrainz