Added values for Artist and Title, are not always marked purple

I started with audio files without metadata. I loaded these in Jaikoz. See the picture below.

After running Auto Correct, I got the result as in the next picture.

Note on this result: All values that are changed by Jaikoz, are supposed to be marked in purple. However, the added values for Artist and Title, are not always marked purple.

I notice your Windows screenshots are different to mine and that you are on Windows 8 whereas I am on Windows 10. I think this may be the cause of the issue, over the years various workarounds would have to be applied to the Gui to fix things like this, mainly the issues have been with MacOS but not always.

I am on Windows 8.1. Moreover, I am using an unofficial “Windows Classic Theme” that tries to recreate the user interface of Windows 2000. It may well be that this explains the issue, especially if you don’t see the issue on Windows 10, and if it is your experience that sometimes workarounds are needed for specific GUIs to prevent such issues.

I do not expect you to create a workaround for my rather unusual GUI configuration. Moreover, it is only a cosmetic issue that my inner perfectionist voice may object to – but that I can live with.

I am not able to try it on windows 10. I am sorry if my unusual GUI configuration has caused you any inconvenience.

After changing Preferences/General/Appearance to Cross-platform and restarting Jaikoz, I ran the same test again. Then the added values for Artist and Title, are still not always marked purple – although the GUI is now completely different. So perhaps the issue is not related to my unusual GUI configuration.

Has anyone else seen this issue?

Above, I ran Auto Correct, consisting of many Autocorrector tasks. That is not a smart idea, when the aim is to identify what happens during which task. So I decided, instead of running all Autocorrector tasks, to run just one task, and to see what happens with each of those tasks. These are the four individual tasks that were carried out (naming of tasks as in Action menu):

These four tasks were carried out in two different circumstances:

This is supposed to happen: (1) The found values for the Artist and Title fields, are placed in those fields; and (2) the color of each field in which a found value is placed, is changed to purple. Of these two things, (1) always happens, and (2) does not always happen. 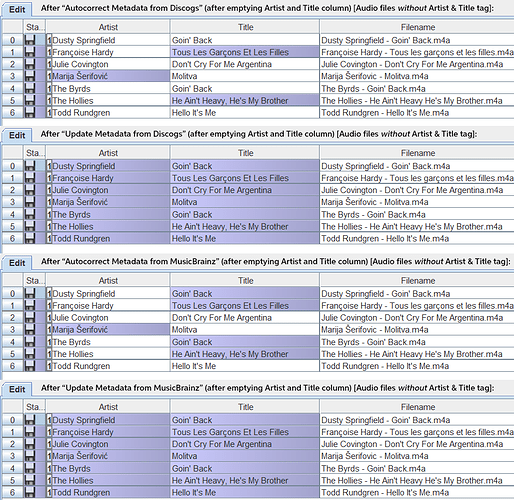 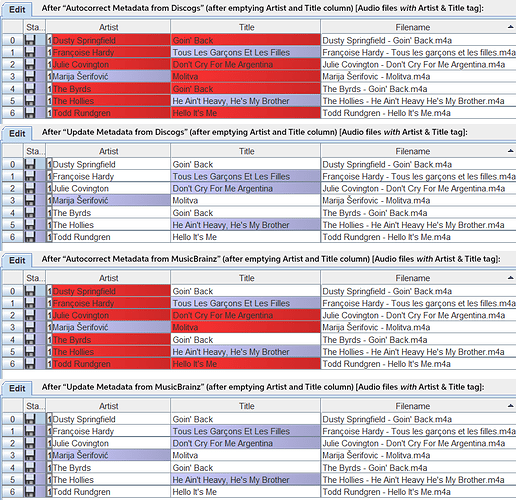